Scenic Virginia and the Thames Landscape Strategy (based in Richmond-upon-Thames, England) honored noted actor and conservationist Robert Duvall as the first U.S. recipient of The Richmonds Medal at a Gala Reception on May 22 in the Rotunda of the Virginia State Capitol. On hand to present the Medal to Mr. Duvall was HRH Prince Richard, The Duke of Gloucester, who serves as patron of the Thames Landscape Strategy.

Scenic Virginia was founded in 1998 by conservationist Hylah H. Boyd of Richmond. The organization gives our Commonwealth’s extraordinary scenic resources a passionate yet reasoned voice with elected officials and citizens. Twenty years later, Scenic Virginia is recognized as the premier statewide advocate dedicated to preserving, protecting, and enhancing scenic beauty.

As part of this year’s 20th Anniversary celebration, Scenic Virginia presented The Richmonds Medal to noted actor and preservationist Robert Duvall. The Medal is an international award given jointly with the Thames Landscape Strategy, based in Richmond upon Thames, England. The Medal recognizes exceptional contributions to scenic preservation and showcases the value of such efforts.

The Richmonds Medal’s founder is The Lord Watson of Richmond CBE FRTS, with whom Scenic Virginia has worked for many years. The Medal’s name is inspired by the strikingly similar river views of the Thames and the James shared by the two Richmonds. 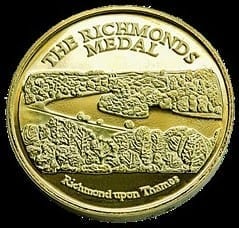 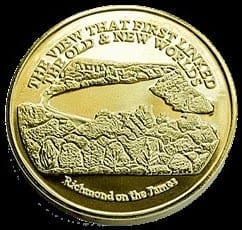 The First U. S. Recipient:

Robert Duvall is the well-known and much-beloved American actor who is a seven-time Academy Award nominee and has won an Oscar, BAFTA, Screen Actors Guild, and Emmy awards. His work includes To Kill a Mockingbird, True Grit, The Godfather, The Godfather: Part II, Apocalypse Now, MASH, Network, Tender Mercies, The Apostle, and the television miniseries Lonesome Dove.

It was Scenic Virginia’s honor to recognize Robert Duvall, who with his wife, Luciana, has worked for many years to ensure the vitality of scenic, historic, natural, and open space lands and landmarks in Virginia and beyond.

Mr. Duvall has long demonstrated a willingness to speak out about the value of preserving scenic beauty. The 2018 Richmonds Medal recognized him for both his longtime support of scenic beauty and for his outstanding leadership in three specific scenic preservation efforts:

Disney’s America. In the early 1990s, The Walt Disney Company announced plans to build a theme park dedicated to the history of the United States. The project was to be built in Virginia, five miles from the site of the Manassas National Battlefield. Robert Duvall was a willing and eloquent spokesperson for the beauty of the countryside of Virginia, and his participation worked to bring national attention to the issue. Facing significant citizen opposition, Disney canceled the project in September 1994.

Piedmont Transmission Line. In 2007, Dominion announced plans for a massive power line that would run through some of our Commonwealth’s most scenic areas in the Piedmont. Robert Duvall rallied opponents to protest the project and stopped it in its tracks.

Wilderness Battlefield Walmart. In 2008, Walmart announced plans to construct a 138,000-square-foot superstore on the eastern edge of Orange County. Robert Duvall joined the coalition opposed to the Walmart Supercenter in the viewshed of Wilderness Battlefield and raised the cause’s profile to the national level. The resulting furor caused Walmart to re-think its plans, providing an opportunity for Senator Tim Kaine and Speaker of the Virginia House of Delegates William J. Howell to work across party lines to find an appropriate alternative site outside the boundaries of the Battlefield, thereby preserving the viewshed. In addition, Walmart donated the parcel to the Commonwealth, thereby ensuring its preservation.

In each instance, Mr. Duvall used his prominent stature to heighten awareness of threats to significant scenic viewsheds and to elicit support for better outcomes. There is no doubt that his participation was critical to the success achieved in each case.

The Duvalls, day in and day out, demonstrate stewardship by example as the owners and thoughtful caretakers of Byrnley, a picturesque and historic farm in Virginia’s beautiful Piedmont region, where they and many of their neighbors are active supporters of the Piedmont Environmental Council, of which Luciana Duvall is a former Board member. There, they generously open their home and farm as a place to educate and inspire others to support conservation organizations and their work. A primary focus of their foundation — The Robert Duvall Children’s Fund — is environmental education.

Scenic Virginia was incredibly honored to bestow the first U.S. Richmonds Medal on such a worthy recipient. We are indebted to the Duvalls for their support of scenic preservation and willingness to be recognized.

Scenic Virginia was honored that HRH once again presented The Richmonds Medal this year.

[To view photos of the 2014 Richmonds Medal event, click HERE.]

Please join us in thanking the following for their generous support of The Richmonds Medal Gala Reception and our work to preserve, protect, and enhance the scenic beauty of our Commonwealth.